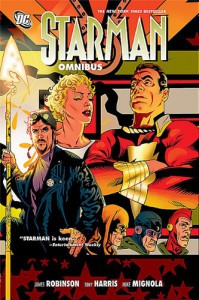 In this volume, Jack Knight continues struggling to live up to the Starman legacy...

I hate to say it, but this volume felt like all filler and setup. Not only that, the book lost something when Tony Harris in the midst of this volume. Still, Starman filler and setup is still some of the best comics on the racks.

This volume has an interesting mix of stories. There's superhero conflict between Starman and Captain Marvel over Bulletman's fate, lots of Times Past stories, including some that weren't reprinted before, all leading up to Ted Knight unveiling the rocket that will take Jack to the stars to find Will Payton in the next volume. As an added bonus, there is a three way team-up between Starman, Batman, and Hellboy, drawn by Mike Mignola himself! Mignola's art almost makes up for the departure of Tony Harris.

In short, while this isn't my favorite Starman, it's still better than 90% of what's getting published today.
Tweet