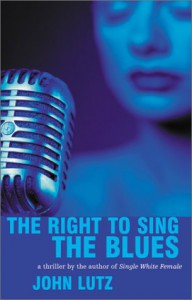 St. Louis detective Alo Nudger is hired to go to New Orleans and investigate a singer for a legendary jazz man named Fat Jack. Only certain people don't want Nudger poking around in their business...

This is the third book in the Nudger series and John Lutz seems to have hit a good rhythm. Nudger's case takes him from St. Louis to New Orleans to several other cities, all in the name of investigating a shady piano player who's romancing the singer at Fat Jack's nightclub who also happens to be the daughter of a mobster.

Honestly, the case was secondary for me. I'm far more interested in Nudger as a character. He's far from a typical detective. He's not particularly tough, brave, or even skilled. He mentions spending an entire morning looking for his car keys, for instance. What he is is tenacious and very human. He pops antacids repeatedly and isn't afraid to throw up when things get gory. He's almost an everyman. He's not great with the ladies and takes a good shit-kicking every time he has a case. He also has an office above a donut shop but it wasn't prominently featured in this outing.

The case itself seemed straight forward at first glance but had a lot more wrinkles than it seemed. I didn't see what was coming until around the time Nudger did. The supporting cast did its job but wasn't as good as the supporting cast of Matthew Scudder, Lawrence Block's ace detective that Nudger seems like a kinder, gentler version of at times.

Did I mention the smart dialogue yet? I don't believe I did. John Lutz's books have a lot of good banter and this one was no exception. Nudger's intellect is a notch above a lot of series detectives without crossing over into obnoxious territory. Just another reason to like the loser.

Any gripes? Well, it was a pretty slim book but I felt the pace could have been a little faster. Also, I felt bad Nudger, just as I did in the previous two books. Did he have to piss blood? Matthew Scudder never pisses blood! Seriously, though, it's a pretty solid detective story. I would have liked it more if Lutz had stuck with St. Louis as a setting but I think Nudger will return to his home base soon enough. 3+
Tweet