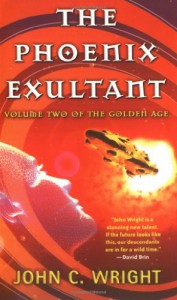 Exiled from everything he knows, Phaethon goes to Ceylon and joins up with a band of exiles. His goal: regain his ship, the Phoenix Exultant, and find those responsible for his predicament. That is, unless, the Silent Ones find him first...

The Phoenix Exultant picks up where The Golden Age left off and kicks things into high gear. Not only is it shorter than The Golden Age, it's a lot easier to follow since Wright established all of the concepts and many of the characters in the first book. Phaethon's primitive conditions on Death Row further facilitate easier reading. When the tech level isn't much higher than our current one, not much thinking is required.

Phaethon's exile from the Oecumene was well done. How many books have you read that feature a man having to take a million flight maintenance staircase down from an orbital settlement rather than taking advantage of a space elevator? Poor Phaethon! Phaethon starts at the nadir of his adult life and has to kick and scratch his way past many obstacles just to get back to being poor. Ironjoy and the other Afloats were quite interesting. Phaethon's pomposity contributed quite a few laughs to the book.

The relationship between Phaethon and Daphne is thrust to the forefront in this volume and is hilarious, even more than Rhadamanthus taking the form of a flying penguin in the first book. Daphne nearly eclipsed Phaethon as my favorite character. Atkins was fleshed out quite a bit and seems to be quite a bad ass now, as he should be, being the sole member of the Oecumene's army.

I'd say the Phoenix Exultant surpasses the Golden Age and is quite a read. Bring on the Golden Transcendence!
Tweet