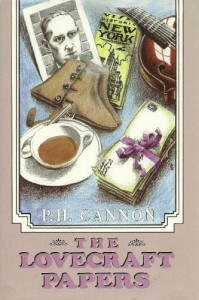 This is a collection of P.H. Cannon's short stories. I will be reviewing them as I complete them.

Pulptime: H. P. Lovecraft and his sidekick Frank Belknap Long get involved in a case of the aging Sherlock Holmes's involving Houdini, spiritualism, illegal immigrants, and smuggling. An entertaining story but lacking in Mythos elements.

Now, on to the Scream for Jeeves section of the book...
Cats, Bats, and Bertie Wooster: A friend of Wooster's from school invites him to his father's sinister mansion in a secluded part of Wales. From there, it becomes a retelling of Lovecraft's Rats in the Walls. Who knew Jeeves had so much mythos lore stored in his mighty cranium?

Something Foetid: Wooster's friend from school, Randy Carter, requests his aid, or more specifically, Jeeves's aid, in figuring out what's wrong with his neighbor, Dr. Munoz. Jeeves, however, refuses to go initially because of Bertie's new suit. Funny stuff. Lots of nods to both Wooster and Mythos tales.

The Rummy Affair of Young Charlie: Jeeves and Wooster go to Paris on command of Aunt Agatha to check on the son of friends of hers, Charles Dexter Ward. This one is by far the funniest of the three stories. Arthur Jermyn as a Drones Club member? Hilarious!

I enjoyed The Lovecraft Papers immensely and recommend it to readers who are fans of two or more of the following: Sherlock Holmes, HPL, or P.G. Wodehouse.
Tweet