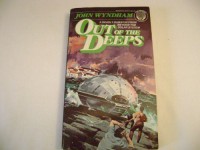 Also known as The Kraken Wakes.

I'm a fan of John Wyndham and his 50's brand of horror sf. Out of the Deeps surpassed my expectations. It has all the makings of a summer blockbuster, probably starring Will Smith. It has a husband and wife team of reporters as the protagonists, a scientist that no one believes, and tentacled aliens that rise from the deep in sea tanks to terrorize the surface dwellers. Let Will do the theme song and you've got a license to print money.

I'll rank Out of the Deeps right up there with Day of the Triffids as one of Wyndham's best.
Tweet