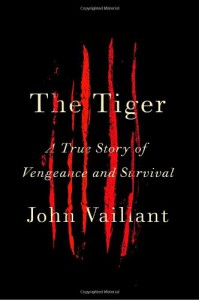 A tiger goes man-eater and terrorizes a remote Siberian village. Can Yuri Trush and his men end the tiger's bloody reign of terror or join its long list of victims?

It sounds like the teaser for a trashy thriller but this story really happened. The Tiger is the story of a rogue tiger and it's man-eating ways.

My description of The Tiger makes it sound like the book is one long tiger hunt but it's so much more than that. The tiger hunt piece is almost an adventure yarn but for me, the best parts of the book were the tangents about tiger hunting and life in Siberia in general. Trush only made 400 bucks a month and it was considered good wages?

I've concluded that life in Siberia resembles a polar post-apocalypse, like if Mad Max ever traveled to Alaska. The denizens of the Siberian taiga have the among the hardest of lives. Imagine using a spear for a backup weapon when hunting in this day and age? Throw a man-eating tiger into the mix and it seems like hell on earth to me.

The final fight with the tiger is pretty tense, especially considering it probably took less than a few minutes. I liked the epilogue, most notably the fact that many of the people in Trush's region think he has the taint of the tiger on him now and won't sleep under the same roof.

The tiger in this book was much less mellow than this tiger I saw at the Saint Louis Zoo, pain-maddened by an encounter with a human poacher.

Vaillant's writing style made me forget I was reading non-fiction most of the time. It's very engaging. The only observation I want to make about it is that he jumps around quite a bit. I like that he devoted a lot of time to some of the tiger's victims but it may have been too much. Other than that, I have no complaints.