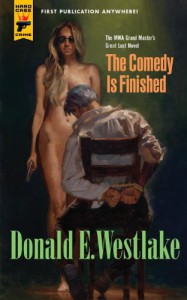 Aging comedian Koo Davis is kidnapped and held for ransom by the People's Revolution Army. But will the PRA let Koo live even if their demands are met?

My reasons for not loving The Comedy is Finished at the beginning are two: the first is that the story is very dated and full of references to the 1960's and Watergate. Westlake's Parker books have an almost timeless quality while this one is very, very much a product of the time it was written. The second reason I wasn't in love with this book is that I found Koo Davis to be more obnoxious than funny.

The story really started clicking for me when the complications began arising and the wheels fell off the kidnappers' plans. Without spoiling too much, there were three plot twists I didn't see coming until it was too late. I actually caught myself getting behind Koo even though I wasn't a big fan of most of his jokes.

The writing is vintage Westlake and does a lot toward earning the book back some points. There were a lot of good similes, some even Chandler-esque. There's a decent amount of violence and a fair amount of smut as well.

For once, there's a posthumously published book I fully approve of. The Comedy is Finished is ultimately an enjoyable read and a worth addition to the Hard Case Crime Series.