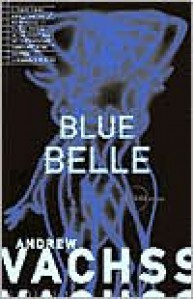 While working to collect the $50,000 bounty on the Ghost Van, a mysterious vehicle whose appearance marks the disappearance of one or more prostitutes, Burke gets entangled with a buxom stripper named Belle. Can Burke keep Belle out of harm's way as he tracks the Ghost Van? And what, if anything, does the Ghost Van have to do with Mortay, the insane karate master who's gunning for Max the Silent?

Wow. Burke bit off more than he could easily chew in this one. The relationship with Belle really complicated Burke's life of scamming and surviving by his wits. Like the other Burke books I've read, Burke and his associates were made to look like angels when compared to the big bad villain, Mortay in this case. The scariest thing about Vachss's books is that he draws the villains from his real life experiences. Chilling stuff.

It was nice to see the old supporting characters and I'm glad Vachss kept Terry around. While Burke is much the same as he was in the two previous books, his supporting cast continues to evolve. Burke's concern for Max was both believable and well done. The disgusting underbelly of New York is almost a character in the Burke series and Blue Belle is no exception. I could easily see Lawrence Block's Matthew Scudder inhabiting the same New York as Burke.

Any gripes? Yeah. The plot came together a little too neatly. It seemed like Burke took a couple really big leaps in deduction. But that problem was minuscule compared to my other problem with the book: Burke's relationship with Belle. I just didn't buy the way she was desperate for Burke to love her a minute or two after they met. The way Burke treated her was in character for him, not wanting anyone getting too close, but I didn't believe that she'd stay with him. Burke's one cold bastard, although he redeemed himself to Belle at the end.

All in all, I enjoyed Blue Belle. Four easy stars.
Tweet