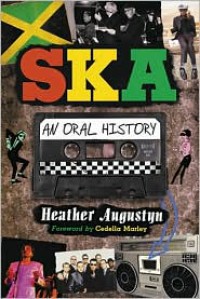 Ska: An Oral History covers the history of ska music from its inception to Jamaica through the ska boom of the 90's, all the way up to present day.

Lean closer everyone, I have something to reveal. I became a ska fan when I got my first CD player in 1993 and my neighbor gave me a copy of Ska Core, the Devil, and More by The Mighty Mighty Bosstones. I've remained a fan of the music ever since, though these days I'm more into the more traditional ska sound of The Slackers, Mr. T-Bone, and Dr. Ring-Ding. Anyway, on to the review...

The chronicle starts in Jamaica, naturally. Pioneers like Derrick Morgan, Prince Buster, Desmond Dekker, Toots Hibbert, and The Skatellites were given their due. Some of the stuff, like Don Drummond murdering his girlfriend and dying in the insane asylum, I was familiar with. Others, like the feud between Derrick Morgan and Prince Buster, I was not.

From there, the English skinhead reggae scene of the 60's is covered, primarily focusing on Laurel Aitken and Judge Dread. The focus shifts to the two tone era of The Specials, the Selecter, Madness, and Bad Manners. It really put me in the mood to dig out the Specials debut album. Actually, I'd say a bit too much time was spent on the two-tone era. I could have done without entire chapters detailing The Beat, The Selecter, and Bad Manners. It seemed a bit like padding.

The third wave was covered, starting with the Toasters and Bim Skala Bim, and moving along with Fishbone, Let's Go Bowling, the Scofflaws, Agent 99, Jump with Joey, and the New York Ska Jazz Ensemble.

Hepcat was mentioned next and I began getting excited. Then radio ska bands like No Doubt and The Mighty Mighty Bosstones (of the Let's Face It era. The glorious pre-Let's Face It era was ignored) were mentioned. Deals gone bad was mentioned and then Agent Jay of The Slackers and Isaac Green of The Skalars talked about how the scene died because most of the people going to shows were in bands and nobody was buying records. Which I witnessed first hand in my first couple of years of going to ska shows.

That's pretty much it. The book did a good job of detailing the history of ska but I think it focused on the two tone era a little too much and could have used more than a mention of The Slackers, since they are by far the biggest touring American ska band at the moment. It also wouldn't have hurt to mention that ska has a much bigger audience in Europe and Japan, evident by the turnouts that Mr. T-Bone, The Moon Invaders, and Dr. Ring-Ding see. For being released in 2010, it doesn't feel current to me.

Man, it's hard to settle on a rating for this. I'm giving it a three. I'd give it a four but the writing seemed choppy in places, especially during the transitions between topics.