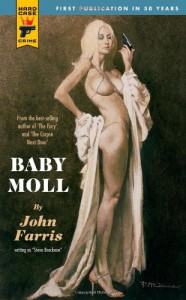 Peter Mallory thought he'd left his life of crime behind six years ago but a week before his wedding, he's pulled back in. Mallory has to figure out who's trying to kill his old boss in order to keep his fiancee from finding out about his criminal past. But what do the killings have to do with a family being killed in an inferno years earlier?

As I've mentioned before, the Hard Case Crime series has some duds in it, most of them from around the time this one was published. Fortunately, Baby Moll was a pleasure to read.

Baby Moll has a pretty good plot. You've got the crime boss who's going soft and wants out of the gang, the up and comer that wants to take his place, and someone who wants vengeance on the crime boss and everyone around him.

Farris knows how to build the suspense. For a slim book, there's a fair amount of action. Mallory goes through the ringer, as does most of the rest of Macy Barr's crew. The gunfight at the end was very memorable.

I tipped to the origin of the killer pretty quickly but that was mostly due to my recent reading of Hard as Nails, featuring a similar killer. I wasn't too sure which of the women the killer was though until it was too late.

"Why only three stars?" you ask. I'll tell you, Mildred. Baby Moll was a little too brief. I would have enjoyed a little more suspense. Aside from Mallory and the unexpectedly complex Macy Barr, the characters were all pretty thin, especially the women. All in all, it was still a pretty good read and a nice way to spend a rainy afternoon.
Tweet