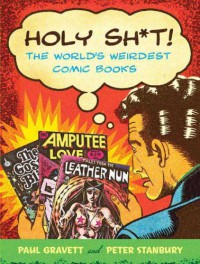 Holy Sh*t! The World's Weirdest Comic Books is a collection of 60-ish cover shots and accompanying explanations of some really weird comic books.

Actually, I thought the weirdness level in this was lacking, probably because I've already read Comix: A History of Comic Books in America. Still, it was an entertaining read never the less.

Most of the comics depicted in this book were shocking for the time period in which they were released but a little tame by today's standards. Some are still pretty offensive, though. The subject matter ranges from foreign versions of familiar superheroes to highly controversial topics like race and sex issues.

This is one of those books that you pretty much have to experience for yourself. I will, however, list some of the books I found to be the most memorable:
Reagan's Raiders
Godzilla vs. Barkley (yes, Charles Barkley)
My Friend Dahmer
Genus (lesbian anthropomorphic unicorns)
Trucker Fags in Denial
Amputee Love
Sh-t!
The Barn of Fear (EC style stories featuring farm animals)
La Donna Ragna (a female porno version of Spiderman)
All-Negro Comics
Fast Willie Jackson (a black version of Archie drawn by an Archie artist)
Leather Nun
Mr. A (drawn by Spiderman's Steve Ditko)
Hansi: The Girl Who Loved the Swastika