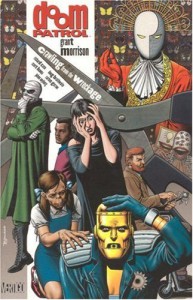 Presents Doom Patrol Volume 1 and Umbrella Academy Volume 1 recently, I thought I'd give the series that fills the gap (of sorts) between them a try, Grant Morrison's renowned Doom Patrol run.

The book starts with Robotman in a mental institution after the Patrol's recent hardships. Robotman meets Crazy Jane, a woman with 64 personalities, each with a different super power. Meanwhile, Negative Man undergoes a bizarre transformation when the Negative Spirit merges with his body and with that of his doctor, an African American female doctor, to form Rebis. As Caulder rebuilds the Doom Patrol, chaos ensues when a fictional reality encroaches on ours and the Scissormen invade. The second story is much stranger than the first. The Doom Patrol encounters Red Jack, a psychotic butterfly torturer that lives in an unescapable house with no windows. He proceeds to hand the Doom Patrol's asses to them.

The weirdness starts as a trickle and quickly becomes a torrent. While this first volume certainly isn't the weirdest of Morrison's run, it's definitly up there with the silver age series. Rebis is one of the more original characters in comics, though I do miss Negative Man a bit. The thing I like most is that while it's a strange book, it's not that much different than the first series. The Doom Patrol are fairly dysfunctional but still act as a family. It's odd that Robotman is the Patrol's most normal member. And why does Robotman wear clothes anyway?

I'd recommend this to fans of odd comics and also fans of the new weird. The Doom Patrol's surreal enemies and the bizarre locales they inhabit should appeal to them.