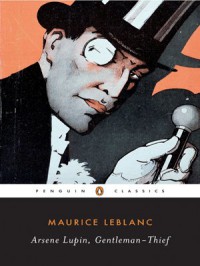 This is a collection of short stories featuring Arsene Lupin, Gentleman Thief.
The Arrest of Arsene Lupin: A trans-Atlantic cruise ship gets a message saying that Arsene Lupin is on board, with a recent forearm wound and going by the name R-. The message gets cut off and hysteria grips the ship. Everyone whose name begins with R is suspected of being Lupin.

The writing is good and there are only slight hints that it's been translated from French. The story was well done and I'm a little ashamed that I didn't see the reveal coming.

Arsene Lupin in Prison: Baron Cahorn gets a letter from Arsene Lupin saying that either he should box up some of his prize paintings for Lupin or Lupin will collect them himself in one week's time. But Lupin's in prison, isn't he?

Lupin in Prison was even better than the first story. Lupin's way of robbing Cahorn from within prison walls is both innovative and plausible. The relationship between Lupin and his nemesis, Detective Ganamard, looks to be the best part of future stories.

The Escape of Arsene Lupin: Lupin, still in the clink, continuously tells people he won't be attending his trial. The authorities intercept a message from an accomplice of his and try to catch him in a trap. Little do they know, Lupin has more than one trick up his sleeve.

As of this story, I am officially a Lupin fan. He's the anti-Holmes, a criminal genius who's still a likeable character. Speaking of Holmes...

Sherlock Holmes arrives too late Lupin's casing a castle under a false identity. He has to be quick with his burglary, however. Sherlock Holmes is on his way...

Usually, crossovers don't live up to expectations. I'd say this one is different. Both Lupin and Holmes are given their due and neither is made to look markedly inferior to the other. The mutual respect between the two is well done.

These are just a sampling of the Lupin adventures contained within. I recommend them to mystery fans, especially those who like their protagonists brash and witty. Arsene Lupin is clearly influenced by Sherlock Holmes but has things in common with P.G. Wodehouse's Psmith character, as well as superheroes like Batman. He plans for every eventuality. Where Holmes uses his intelligence for good, Lupin uses it for personal gain, governed by a somewhat noble code of ethics.

2012 Note: I'm reading The Quantum Thief by Hannu Rajaniemi. It's partly an sf homage to Lupin and brought back fond memories of reading this.
Tweet