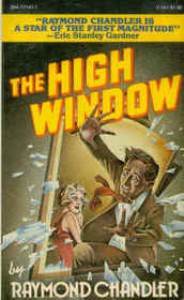 Philip Marlowe is hired to find the Brasher doubloon, a valuable gold coin stolen from its owner. Marlowe trails the owner's daughter in law, thinking she stole the coin. Marlowe's path leads him into a web of murder and blackmail. Will Marlowe be able to find who stole the doubloon without winding up on the pile of corpses left in its wake?

As I continuously mention, noir fiction of this type agrees with me like a bottle of Mad Dog does a homeless man. The High Window, Raymond Chandler's third Philip Marlowe book, is no exception.

A wise man once said "No one reads Raymond Chandler for the plot." I agree with whomever that wizzened old sage was. Chandler never met a plot he couldn't overly complicate but The High Window is one of his more coherent ones. The search for a stolen doubloon sees multiple men dead and a wealthy family's secrets pulled out of the basement and thrown on the front lawn for all the neighbors to see.

Marlowe is Marlowe. As usual, much of the supporting cast exists mostly for Marlowe to bounce great lines off of and/or have sapping or shooting at him. The Bright family is a bunch of rotten apples one and all.

As I said before, this is one of Chandler's simpler plots but it's still a bit of a mess. It took me a little while to tip to the connection between the dentist and the missing coin. The blackmail angle was well done. Chandler played his cards close to the vest, like always. "It just made me want to climb up the wall and gnaw my way across the ceiling." Marlowe used that line to describe a drink he took. That's how I felt about the plot sometimes.

While it's my least favorite of the three Chandler books I've read so far, The High Window is still a great read, if for no other reason than to experience Raymond Chandler's prose. Not quite a four but it's an overflowing three star read.
Tweet