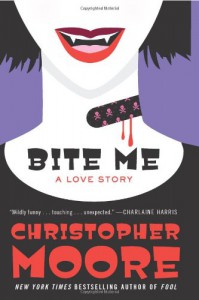 A monstrous horde of vampire cats stalks the streets of San Francisco and only Abby Normal can save the city... with the help of Tommy Flood, Jody, the Animals, Foo, Jared, Cavuto and Rivera. Will Abby fulfill her lifelong ambition of becoming a creature of the night?

Bite Me is a pretty damn funny book. The chapters written from Abby's point of view were hilarious and Tommy and Jody's relationship progressed to the next step. The supporting characters were also good and Foo Dog's experiments with the vampire rats gave the book a little something extra. I'm also glad Moore threw in Chet the Vampire Cat from the last book as a big part of the story instead of sweeping him under the rug. Rivera and Cavuto, as always, were a joy whenever they made an appearance. And I can't forget about the Emperor of San Francisco.

In short, Bite Me is damn good. It's been too long since my last Moore-gasm. As far as I can tell, Bite Me's only flaw is that it isn't Lamb.
Tweet