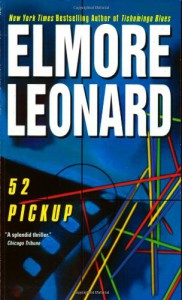 Blackmailers have factory owner Harry Mitchell over a barrel. Either he pays them $105,000 a year or they turn over an incriminating film of him cheating on his wife to the police and press, and more, if he doesn't pay up. Too bad Harry Mitchell has ideas of his own...

Elmore Leonard sure knows how to weave a serpentine tale, doesn't he? He takes a story that seems simple on the surface, that of some blackmailers hitting up a pigeon for money, and turns it into something else all together. It was written in 1974 but has a certain timelessness to it.

Harry Mitchell is the usual Leonard protagonist: cool, capable, and not entirely spotless. The way he handles the blackmailers set the stage for later Leonard protagonists like Chili Palmer and Raylan Givens. I like that Leonard made Barbara's behavior toward Harry believable after she found out he had an affair. About my only complaint with the story is that I wish Barbara would ahve gotten a crack at getting some payback on Alan.

The bad guys are an unsavory crew, as to be expected. I didn't expect some of them to go out the way they did, though. That's one of the reasons I mean to read more Elmore Leonard in 2012. He manages to surprise me in each outing. As usual with Leonard, the dialogue is as smooth as fine Scotch.

While it may be slightly less polished than some of his later works, all of the Leonard hallmarks are there: double crosses, slick dialogue, and fairly believable situations. I couldn't wait for the blackmailers to get what was coming to them and Leonard did not disappoint. Very highly recommended.
Tweet