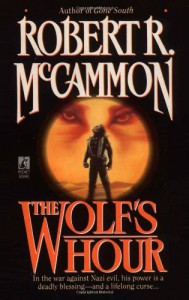 Michael Gallatin is a master spy during World War II. He also happens to be a werewolf. He comes out of retirement for one last mission: to stop a secret Nazi operation called Iron Fist. Can Michael stop Iron Fist and retain his humanity?

The Wolf's Hour is what would happen if Captain America was a werewolf instead of a super-hero. Yes, I remember the atrocious CapWolf storyline from the 1990's. That doesn't count since it didn't happen during World War II.

Wolf's Hour tells two parallel stories: one of Michael Gallatin in World War II and another of young Mikhail Gallatinov, a Russian boy who becomes a werewolf when his family is killed. While both branches of the story had a good amount of action, I was far more interested in the Mikhail storyline. The WWII storyline had far too little werewolf action for my taste.

McCammon's writing is workmanlike. He's not going to win awards on prose alone. However, I do enjoy what he writes. The action sequences are well done and the bits involving werewolves are suitably gory. I thought Michael Gallatin was a good character for what he was meant to be: James Bond as a werewolf. None of the other characters really did much for me.

slightly later edit: I thought it was a little long for what it was. If it had been cut down to 400-450 pages, it would have easily gotten another star.

One last thought: Did you know werewolves pee on one another? I did not.

All in all, this is a good pulpy action story starring a werewolf. If that's all you're expecting, you won't be disappointed.
Tweet