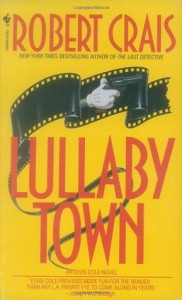 A Hollywood director hires Elvis Cole to track down a wife and son he abandoned a decade earlier. Cole tracks down the ex-wife and quickly finds out that she's under the thumb of the mob. Can Cole save her and re-unite her with her former husband?

Elvis Cole sure got in over his head in this one. Crazy mobsters, secret deals between crime families, and a Hollywood director that is a colossal asshole make for a great story. As always, Crais let the tension build until a great firefight at the end.

Karen Lloyd, the ex-wife, was far more than a damsel in distress and my favorite member of the supporting cast. Peter Alan Nelson was a douche bag of epic proportions and I have to think Crais drew from his own Hollywood experiences when creating him. The ever-changing dynamic between Karen, Peter, and their son Toby was one of the more memorable parts of the novel. Crais gave us more of a look into the psyche of Elvis Cole, as well as a tiny glimpse behind Joe Pike's sunglasses.

The more Robert Crais books I read, the more convinced I am that he is the real deal. With this volume, any thoughts of Elvis Cole being a Spenser ripoff have vanished. Lullaby Town would be a worthy addition to any crime/mystery fan's book shelf.
Tweet