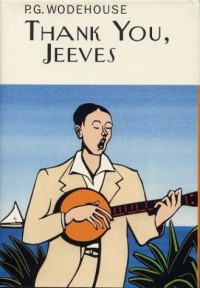 Jeeves and Wooster break up after Jeeves lays down an ultimatum and Bertie chooses his banjolele over his manservant. Hilarity ensues.

The 2011-2012 re-read...
After Jeeves and Wooster have a spat over a banjolele, Jeeves leaves Wooster for Lord Chuffnel, who is enamored with Bertie's ex-fiancee, Pauline Stoker. Complicating matters are Stoker's dad, a millionaire who wants to buy Chuffnel's mansion, and Chuffy's, who is being pursued by Wooster's old nemesis, Sir Roderick Glossop. When Bertie winds up engaged to Pauline instead of Chuffy, can even Jeeves set things right?

After so many books, I'm almost at a loss at trying to convey the awesomeness of P.G. Wodehouse in words. He moves the characters through the various scenes like a puppet master. While this is the first Jeeves novel, it's by no means the genius butler's first outing. I'd forgotten how much history there was between Bertie and Sir Roderick Glossop, renowned nerve specialist, prior to this book. The supporting cast did a good job driving the story, from the Stokers to the Chuffnels to Brinkley, the replacement Jeeves. Little Seabury and his protection racket cracked me up.

Things are not as perfect as they would later become in the Jeeves books. Today's readers may find Bertie and Glossop being in blackface for a good portion of the story and the casual use of the n-word is sure to offend. Since this was the first full length Jeeves outing, it feels like old Plum was still working some of the bugs out.

Still, it's still a great story. So many lines of quotable dialogue and hilarious situations. Even though you can see a lot of them coming, it doesn't lessen the impact. As usual, it was a joy to watch Wodehouse do what he does best.

I enjoyed revisiting Thank You, Jeeves, with the Wodehouse Cracks Me Up group and am excited about reading the other eight this year.
Tweet