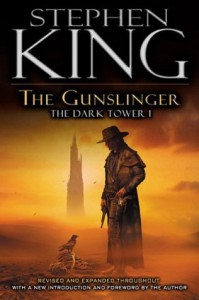 The man in black fled across the desert and the Gunslinger followed.

Roland Deschain, the last of the Gunslingers, is on a quest for the Dark Tower, a mysterious edifice that is the axle of worlds and holds all existence together. In this, the first volume, Roland pursues his nemesis across the Mohaine Desert. He follows the man in black's trail to a little town called Tull, then through more desert, encountering a boy named Jake from our world, and then into the mountains. Will Roland finally catch his arch-nemesis after years of pursuing him? And what means will he go to to achieve his goal?

When I first picked up this book, I had no idea it would shoot to the top of my favorites list. I wolfed down the first four books in three weeks, then entered an agonizing period of waiting for the last three to be published. I think I've read the first four books five or six times each. The whole Dark Tower series, while on the surface a fantasy-western, is really the story of one man's obsession. In this volume, we get a hint of what Roland will do to get to the Dark Tower.

The writing is great and it warmed me up to Stephen King. Roland's world is unique. Part fantasy, part western, part post-apocalypse. While it's the first book in a series, it's quite satisfying to read on its own.

If your looking with fantasy with a different flavor, look no further.

Additional Thoughts from the April 2011 re-read:
Some of the additions in the revised edition of this book were much-needed and brought the first book into synch with the later ones. Others seemed a little ham-fisted and took away a bit of Roland's mystique.

I like the idea a certain curmudgeonly Kansan reviewer proposed that the first edition of The Gunslinger and this one are from different cycles in Roland's quest.

I think it's a testament to Stephen King's skill as a writer that even on my sixth or seventh go round, I was still hoping Roland wouldn't let Jake fall.