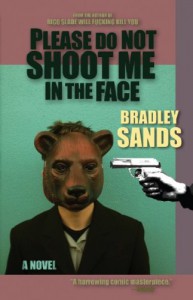 Frankie Nougat and the Case of the Missing Heart: Frankie Nougat attempts to solve the case of why his parents are getting divorced. Grim hilarity ensues...

Yeah, Frankie Nougat goes through some emotional turmoil while trying to find out why his parents are getting divorced. Memorable moments including using his dog for a gun and meeting his mom's new chair, a man named Bill.

Cheesequake Smash-Up: In a battle for fast food dominance, McDonalds, Burger King, White Castle, and scores of other chains enter a building demolition derby. Gunning for a promotion, office worker Monty Catsin enters his employer, NGA, into the derby as well. Who will emerge as the sole provider of fast food in America?

Cheesequake Smashup is mother-whoopieing hilarious. Combine an absurd office, complete with an octogenerian sexpot, a giant goldfish, a gorilla, and lots of mobile buildings smashing into one another, and a heaping helping of absurd humor and you've got a winner on your hands. I'd say Cheesquake Smashup was worth the price of admission on its own.

Apocalypse Ninja: The worst ninja in the world tries to bring about the end of the world. Standing in his way are the worst pirates in the world.

The final tale in this collection (or the final section of this novel?) was by far the most enjoyable. The grins per page rating was very high and there was a lot of action. Also, there was a song that I couldn't help but hum along with to the tune of You're the Best from The Karate Kid.

So, is Please Do Not Shoot Me in the Face a novel or a collection of novellas? Who cares? If the epilogue is any indication, it's going to be bigger than The Bible one day!
Tweet