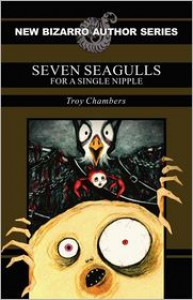 A nipple named Wilmorn falls in love with a woman and bargains with the Seagull gods for a chance to win her. Only she's a nun. And a lesbian. And he has to kill her true love to win a soul so he can have a life with her. Man, things are rough for nipples these days...

First off, this is the weirdest book in the 2011-2012 New Bizarro Author Series so far. It's also the best story featuring a talking nipple I've ever read.

This is one of those books I can hardly think of a way to describe beyond the summary. Like I mentioned, Wilmorn is a talking nipple that makes a pact with the Seagull Gods. His naivete is actually a little charming and nicely balanced by Stalin, the baby-faced lobster demon who was a serial rapist in a previous life. Yes, you read that right. No, I did not make that up.

It takes quite a bit for a book to make me shake my head in disbelief but I caught myself doing just that several times during this books slim 60 pages. Most of those were because of Stalin's actions. The ending was a bit of surprise.

Troy Chambers is a madman and I'll give him another shot sometime down the road. That's all I have. I don't really know what else I can say about this.
Tweet