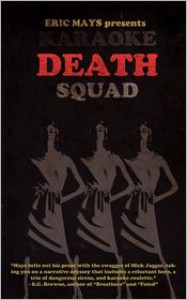 Who are the three mysterious women roaming Baltimore's Karaoke scene and why do the men that leave with them disappear without a trace? That's what Odie Wharton wants to find out. Can he solve the mystery of the disappearances without disappearing himself, even with his Karaoke Death Squad watching his back?

The Bizarro genre is a lot like one of those boxes of assorted chocolates. When you pick one up, you could wind up with a choclate filled with caramel, crunchy frog, or even something disgusting like coconut. Karaoke Death Squad is one of the more accessible Bizarro novels I've ever read.

Mythology from various cultures is touched upon but you won't need a fairly useless degree to understand what's going on. It's told in the first person like a noir tale and Mays does a good job building the tension.

The characters are an interesting bunch. Odie Wharton, the lead, is a loser who lives in an "apartment" above his mom's house and works part time at a convenience store. When he's not being a Karaoke superstar, however. When other singers started dropping like flies, Odie doesn't waste time.

There are so many hilarious one-liners in this book that I quickly stopped writing them down. Odie's a character, that's for sure. If they made a KDS movie, he'd be played by Jack Black. The rest of the characters are pretty cool. Boris the Russian was easily my favorite.

There's not a lot more I can say without ruining a lot of the surprises. Karaoke Death Squad was a fun read. Eric Mays won me over with his short story in the Copeland Valley Sampler and continues to impress in this book. KDS should appeal to fans of Christoper Moore, Neil Gaiman's humorous work, and probably even fans of stuff like the Dresden Files. Highly recommended.
Tweet