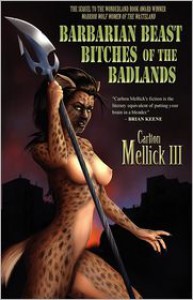 Barbarian Beast B*tches of the Badlands is a collection of three novellas set in the world of Warrior Wolf Women of the Wastelands.

Barbarian Beast Babes of the Badlands: Apple and her boyfriend Sam join the pack of warrior wolf women. How will Sam adjust to his status as Apple's property and his new robot legs?

Barbarian Beast Babes of the Badlands was a nice way to get the collection started and re-introduce the world. It was cool reading about Apple, Talon, and Hyena again. The colossus and metal worms were good villans.

Horrendous Horror of the Hateful Hamburglar: As a band of Outlanders fights against a horde of mutants under the control of brain-eating parasites, the Hamburglar's horrifying past is revealed.

The Hamburglar, greatest samurai that ever lived, was only briefly glimpsed in Warrior Wolf Women of the Wastelands. He takes center stage in this one. My favorite line was "Before he was the Hamburglar, he was an ordinary psychopath."

Ferocious Female Furries in the Forbidden Zone: Set months after Warror Wolf Women of the Wastelands, Slayer steps into a leadership role with the tribe and makes Hyena her second in command. Talon and other Wolves are infected and the girls head south into the Forbidden Zone to find the cure.

The backstory of the metallic worm parasites takes center stage in this one. The culture of the Forbidden Zone was fascinating and the dynamic between the Wolves after Slayer took charge made this the standout of the book.

While I didn't enjoy this one as much as Warrior Wolf Women of the Wastelands, it's definitely a good read and should appeal to everyone who enjoyed the first book. If you're needing a lady post-apocalyptic werewolf fix, look no further.
Tweet