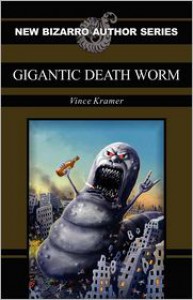 When Dave, his friend Mike, and Mike's girlfriend Suzanne get stranded on a ski lift, that's just the beginning of their problems. Soon, they're being attacked by bears that shoot wolves out of their mouths. Before they know it, gigantic death worms are attacking all the major cities in Arizona. From there, things get a little weird...

Here we are again. An entire new New Bizarro Author Series. Will it match up to the class of 2010-2011? If Gigantic Death Worm is any indication, then yes.

Ever hear of The Aristocrats joke? You know, the one about the guy who walks into a talent agent's office and describes a family doing some of the filthiest things you can imagine on stage? If the Aristocrats joke involved giant monsters, it would be Gigantic Death Worm.

The characters in Gigantic Death Worm are an interesting bunch, to say the least. Dave, the protagonist, has a fairly interesting power caused by brain parasites. He can make things appear out of thin air. I won't reveal the source of his power but it's a doozy. Ponce DeLeon II: The Revenge, was the lynchpin that stopped the plot from being a bunch of gay jokes. Too bad he went out like he did. Worm-Head Girl didn't do anything for me at first but she rose to the occasion. All that aside, I'd say the Mexican ninjas were my favorite part of the tale. "That Ramon!"

Gigantic Death Worm is hilarious. That's about all I have to say.
Tweet