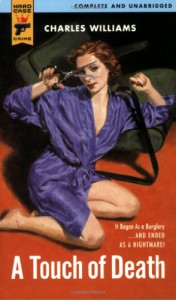 When washed up football player Lee Scarborough gets hired to steal $120,000 from a banker's widow, how can he pass it up? Little does Lee know that other people have their sights set on the money and the widow herself. And Madelon Butler, the widow, is the most deadly of them all...

A Touch of Death has many of the things I look for in a crime novel. There are multiple double crosses, gunplay, and the tension of being on the run. Madelon Butler is by far the most interesting character in the novel; beautiful, cold, calculating, and deadly. Lee had big hopes for the dough but wound up way over his head.

So why only a 3? William's writing seems really stiff compared to the other work of his that I've read, The Hotspot. It felt like he was afraid to really cut loose. There was no sex and only a little violence. The suspense was good but not as good as in the Hotspot.

The final verdict is that this isn't a bad read but is neither the best Hard Case nor the best Charles Williams book.
Tweet