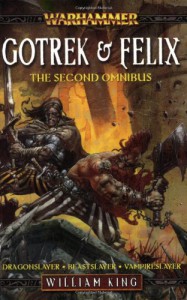 Dragonslayer:Upon leaving the Chaos Wastes for Middenheim, The Spirit of Grungni is attacked by a dragon and heavily damaged. The only place to put in for repairs is Slayerkeep, the city of Slayers. Gotrek and six other Slayers swear vengeance on the dragon and brave the Big Mountains, as well as a horde of orcs and an army of bandits, to kill the dragon and take his treasure. Has the doom Felix has sworn to record finally come?

Dragonslayer was action packed. The Slayers, though by definition fairly single-minded, were different enough to be viable characters. William King's writing in once again at a much higher level than other fiction of this type. Felix continues to progress as a character and is the audience's viewpoint character for much of the story. At one point he scolds himself for spending more time worry about his relationshp with Ulricka than about slaying the dragon. Gotrek, as always, is a nigh unstoppable killing machine.

All in all, a quick and enjoyable read.

Beastslayer: Praag is under seige by the Chaos horde with Felix, Gortrek, and their allies trapped inside. Can Felix, Gotrek, and their Slayer companions weed out the evil within before the city falls?

As always, William King delivers a suspenseful fantasy tale. It's amazing how he can achieve an epic scope within a slim story less than 300 pages long, yet another example that 'epic' does not necessarily mean a series of never-ending doorstops.

Beastslayer was tense. Characters from the previous two F&G books were killed, as well as a hell of a lot of other people. Most readers will probably figure out who the traitor is pretty early on but that doesn't ease the tension very much. Felix and Gotrek continue to develop as characters, as do the supporting cast. Well, those that survive...

Vampireslayer: A vampire kills a noble, steals a potent talisman from his collection, and kidnaps Ulrika. Can Felix and Gotrek stop him before he uses the talisman to raise an undead army?

Vampireslayer was the weakest story in the omnibus and a letdown after the first two. Still, it had a good amount of tension. The fate of Ulrika was unexpected, as was Adolphus Krieger's final fate.

All in all, the second Gotrek and Felix omnibus was an enjoyable read. It wasn't as good as the first one but still great fun.
Tweet