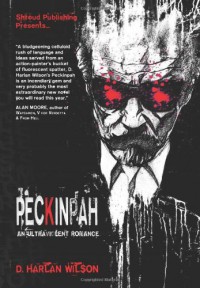 Peckinpah is an absurdist tribute to the films of Sam Peckinpah. While my summary makes it seem like a fairly standard revenge tale, it's not. It's so weird that even though it was less than 110 pages, I couldn't have taken much more.

Peckinpah seems to take place in the same world as DHW's SciKungFi trilogy. Amerika was mentioned a few times, as were the goat-headed men. Since the book was a tribute to Peckinpah films, I knew how it would end but it was still fun getting there.

That's about all I can articulate about Peckinpah right now. It's slightly less weird than Dr. Identity and way less weird than Codename Prague. It's an enjoyable little book and a good way to spend a couple hours.
Tweet