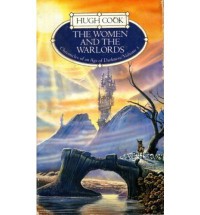 Hugh Cook said that this book was the one that made the Chronicles of the Age of Darkness commercially unviable. It's not hard to see why he said that. Yen Olass is hardly the typical fantasy heroine. She's large, mean, homely, and has strong lesbian leanings. Still, her story was very good and showed that Hugh Cook wasn't your average fantasy writer.

Like the two books before it and the two after it, The Women and the Warlords tells of the war between Argan and the Collosnon Empire. Morgan Hearst, Bluewater Draven, and Watashi are the characters from the other books prominently featured. The siege of Castle Vaunting using the madness jewel is depicted yet again, this time from the point of view of one of the denizens. Instead of focusing on heroism and war, this book focuses on the place of women in Collosnon society.

In short, the women of Collosnon are treated like objects for the most part. Yen Olass, an oracle, was treated even worse. Oracles are sexually mutilated when they come of age and sewn shut. No wonder Yen Olass was so angry all the time. Anyway, Yen Olass gets caught up in a web of lies, blackmail, and intrigue, and somehow manages to survive. Not somehow. She's a survivor, used to living on her cleverness.

As always, Cook won me over with his originality. None of the fantasy stock monsters were used. The enemy was primarily human. The wishing machine was extremely creepy and I wondered for most of the rest of the story who or what Monogail's father was. I'm sure I'll find out in later volumes.

One of the most convincing parts of the story was Yen Olass's love for Monogail and Resbit, both very well done, as was Yen olass's heartbreak when Resbit left her for a man.

No review of The Women and the Warlords would be complete without the mention of two scenes. First, four people are nearly stoned to death. It was brutal and masterfully written. Second, without spoiling two much, two characters have a fight to the death that is shocking in its brutality. I've never read another fantasy story where someone has his head dashed in by rocks, is disemboweled, and has his genitals cut off. Brutal, brutal stuff.

Highly recommended, both to fans of the Chronicles of an Age of Darkness, and to fans of fantasy heroines who stay away from the chain mail bikini stereotype.
Tweet