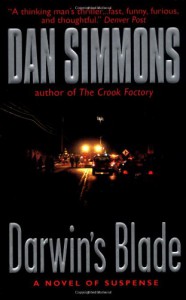 Accident reconstructor Darwin Minor gets into an accident himself. It turns out people are gunning for him. But why? With the help of beautiful FBI agent, Sydney Olson, he's going to find out...

Dan Simmons is one of the more versatile writers active today. He can write in any genre, from science fiction with Hyperion, to horror with Carrion Comfort, to crime with Hardcase, to this, a thriller.

The Good:
Darwin Minor reconstructs car accidents, trying to prevent insurance fraud. It's a pretty good occupation for the main character in a thriller to have. He's smart without being annoyingly so and his Vietnam past as a sniper gives him added depth.

Cracking a far-reaching insurance fraud ring is a plot I've never read before and Simmons gets some good mileage out of it. The bizarre accidents Dar reconstructs are almost worth the price of admission on their own, from the guy who managed to shoot himself in the testicle to the guy who ended up at the bottom of the cliff with a tree branch up his ass and a pickup truck on top of him.

The action in Darwin's Blade is fast and furious when it happens. The car chase near the beginning was one of my favorites of all time, in books anyway. The shootout at the end was also quite spectacular.

The Bad:
Here we go. I realize that all thrillers have the obligatory hookup between male and female characters but this one felt really forced. Like Simmons thought "I have a thriller so I'd better introduce an attractive female for my main character to fall in love with." Like I said, it felt forced.

The other gripe that I have is that Darwin's Blade, to me at least, seems really wordy for what it is. It's about 100 pages longer than it should be. I don't need six pages about how Darwin's sailplane works, nor do I need three or four pages that are mostly equations. The philosophical bits, while interesting, didn't add all that much to the story except for giving Darwin something to talk about.

Elmore Leonard has his eleven rules of writing. For my money, a crime book or thriller should follow most of them.
1. Never open a book with weather.
2. Avoid prologues.
3. Never use a verb other than “said” to carry dialogue.
4. Never use an adverb to modify the verb “said” . . .
5. Keep your exclamation points under control.
6. Never use the words “suddenly” or “all hell broke loose.”
7. Use regional dialect, patois, sparingly.
8. Avoid detailed descriptions of characters.
9. Don’t go into great detail describing places and things.
10. Try to leave out the part that readers tend to skip.
11. If it sounds like writing, I rewrite it.

I'd say Darwin's Blade breaks about half of them.

I'm sounding too negative. Overall, I liked Darwin's Blade enough to give it a three but not enough to not convert it to store credit at my earliest convenience. It's good and Simmons fans will want to read it but if you're only going to read one Dan Simmons book, it shouldn't be this one.
Tweet