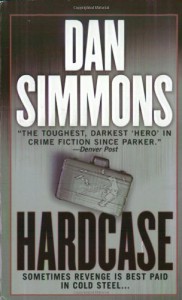 After eleven years in the clink, Joe Kurtz, eager to get back on his feet, signs on with the mob to investigate who is highjacking their trucks. But can Joe figure out who's stealing from the mob before someone from his past guns him down?

Wow. Dan Simmons knows how to spin a yarn. Hardcase is an homage to the Parker books for Richard Stark but manages to steer clear of ripoff territory.

Joe Kurtz is a former PI that winds up working for the mob and gets caught in the middle of a power struggle. Simmons' style is reminiscent of Stark's; spare and powerful. The story is full of twists and turns, especially in the last forty pages or so. The action is fast and brutal and Kurtz is far from unscathed when the story draws to a close.

I can't say much more without giving too much away. The title is accurate; Joe Kurtz is a Hardcase of the highest order. If you're looking for a great crime novel, come and get it.
Tweet