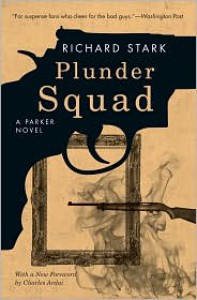 A hijacking job goes south when George Uhl rears his ugly head. On top of that, Parker gets involved in an art heist. Can Parker deal with George Uhl and pull off the art heist?

Parker's run of bad luck continues in this one. The first heist goes bad, Parker has to take care of Uhl AND another guy, and the art dealer who hired Parker and company turns out to be in some serious money trouble. Poor Parker. The guy is as unlucky as Dortmunder in the last few books.

The action is fast and furious in this one, as are the double crosses and complications. Parker is as relentless as ever, seeing as how he doesn't intend on making any more mistakes like letting George Uhl live. For once, there wasn't a weak link in the men on the job, just in the financier. It was good to see Stan Devers again. There haven't been many recurring characters since Handy retired and Salsa bought it. Since Parker's funds are running low, I can only imagine the tension level in Butcher's Moon.

The Plunder Squad was definitely in the Parker top five. Now I'm in a holding pattern until the University of Chicago reprints Butcher's Moon.
Tweet