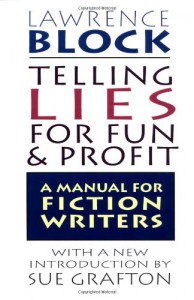 Telling Lies for Fun & Profit is a collection of some of Lawrence Block's columns from Writer's Digest.

Most of the time I see books on writing, they're by people I've never heard of and I pass them by. Stephen King's On Writing has been my favorite book on writing for years... but now he has competition.

I picked up this book because Lawrence Block has become one of my favorite writers in the past few years and because I felt like I have more in common with the esteemed Mr. Block than I do Stephen King and was I ever right! Block shares bits of wisdom stemming from his experiences as a writer and entertains as he teaches. Block talks about cranking out a soft core porn novel in three days to pay the hospital bills when one of his kids was born, as well as taking forever on other novels. Most of the time, I felt like Block was talking directly to me, so much so that this book could have been called Telling Lies for Fun & Profit, Dan.

Block covers topics as diverse as character names, procrastination, and P.G. Wodehouse's skill at turning nouns into verbs, all three being topics near and dear to me. So many of the things I experience when I write were addressed in this book.

So why only four stars? The book is pretty outdated. I lost count of how many times Block mentioned a typewriter and the idea of using a library for research instead of the internet is almost unfathomable in this day and age. But my main gripe was that I wanted it to be four or five times as long. Luckily, I already have the next Lawrence Block book in my possession...
Tweet