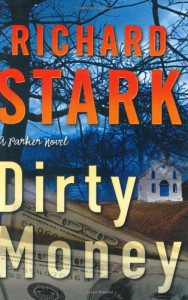 Here we are. The last Parker book. Was it a fitting swan song for one of the best crime fiction series ever written? Not really, but we can chalk that up to Richard Stark's untimely demise.

Dirty Money is a pretty standard Parker book. You've got the crew, namely McWhitney and Sandra, you've got the complications, Dalesia, Oscar, and the manhunt still going on for Parker and McWhitney, and you've got the man himself, Parker, going after the money like a shark.

Of all the post-Butcher's Moon Parkers, this one is in the top two. I won't say it's padded but it feels like it could have been split into two books the size of The Hunter. The first half of the book deals with getting the money and dealing with Dalesia, and the second half deals with getting rid of the dirty money and acquiring clean money.

That's pretty much all I can say. Parker's plan worked out well, as always, and he dealt with the complications as he always does. It didn't feel like a series ender, but I can't imagine Parker retiring any way other than in the grave. Maybe the widow Stark will contract someone else to write further Parker capers but I hope she doesn't, unless she acquires a time machine and gets the Richard Stark of the early 70's.

It's a sad day, really. No more Parker, no more Grofield, no more Claire, etc. Parker went out on top. I envy people who have the chance to read the series for the first time. If you're into crime fiction, this series, along with the Matthew Scudder series by Lawrence Block, are the books against which the rest of the genre should be measured.

So long, Parker. I wouldn't want to meet you in a dark alley but it's been fun reading about you.
Tweet