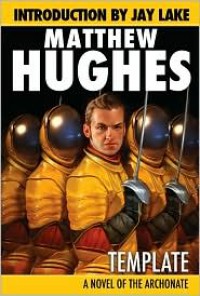 Indentured professional duelist Conn Labro finds his sole friend murdered and his debt cancelled. Among his friend's affects was the deed to an entire world, willed to Labro. Can Labro figure out why his friend was murdered and where he belongs in the universe?

Template was a pretty good tale. While on the surface it's a detective story/space opera, it's really a series of culture clashes. Conn's homeworld of Thraiss is centered around greed. Conn's interactions with his eventual love interest, Jenore, are hilarious. The villains are a gang of vile intergalactic perverts and you can't wait for Conn to settle their hash. The book is actually fairly light on action. There are only three really action-packed scenes. The rest is Conn doing his detective work and running into culture clashes.

For a book about a professional duelist, the story could have easily degenerated into a mindless actionfest but Hughes never sinks to that level. It's a very deep story for what it is.

I was leaning toward a five but I had to go with a four. The reason: the title gives away a plot point. If it had had a different title, I wouldn't have tipped to the ending so early on.
Tweet