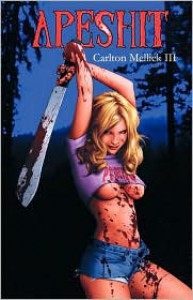 Six teenagers go to a cabin in the woods for a weekend of sex, drugs, and rock and roll. Little did they know they'd end up with a psychotic monster trying to kill them...

Wow. This was the goriest, craziest, goriest book I've read this year. I realize I said "goriest" twice but this book is so gory I thought one "goriest" wasn't going to cut it. It started out like a typical slasher movie. Three guys, three girls, various sexual entanglements. Then the inbred mutant showed up and things got turned upside down. I devoured it in two sittings. Luckily, not while I was trying to eat.

Seriously, there's enough weird sex and gore in this book to sate anyone's bloodlust. How many books have you read that feature a woman with her intestines hanging out for half the book, a woman with an abortion fetish, and another with teeth in her vagina? And all that's in the first forty or fifty pages! Much weirder things happen later.

The twist at the end was nicely done. I was wondering how everyone was still alive and the ending wrapped things up very neatly.

While it's definitely not for the squeamish, Apeshit is a crazy tribute to slasher flicks and is quite a wild ride. Just don't try to read it while you're eating.
Tweet