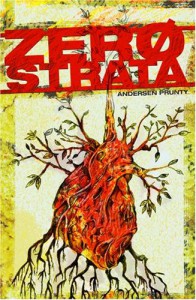 Depressed 20-something Hansel Nothing returns to his mother's house to recapture the zest for life he had in his childhood. It's just as he remembered it. His dad has run away to become a superhero, his brother hasn't left the house in two years, and his mother is addicted to prescription drugs. While sitting in his tree house, Zerostrata, he notices a naked girl running through the woods and immediately knows his life is going to get better...

I didn't really know what to expect from Zerostrata but it exceeded my expectations by parsecs. It's part modern day fairy tale, part Royal Tenenbaums. Hansel's family are sure an interesting bunch, from his brother wanting to be their father's superhero sidekick to his mother having a friend stay with her, to the crazy therapist Dr. Blast. It very much has the feel of a Tim Burton movie.

Hansel himself is the most interesting character, a character who can't remember much of his past, unsure of his pace in the world, and longs for a return to childhood. I sure didn't expect to identify with a character in a bizarro novel but here we are. When he meets the naked running girl, Gretel Something, you know things are going to turn out okay.

Zerostrata is short and sweet and would make a good first Bizarro for someone. It's not intimidating and no one gets sodomized with anything. Easy five stars.
Tweet