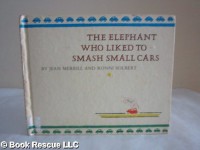 A friend of mine recommended this to me, saying it was a little demented for a child's book. Boy, was he right!

My girlfriend at the time of my reading was a little weirded out by the book and asked me what lesson it was supposed to teach a young reader. I smirked and said "If you act like a jerk, someone is going to settle your hash sooner or later." She wasn't amused.

I wish my mom would have read this to me when I was a youngling. Funny stuff, even for adults.
Tweet