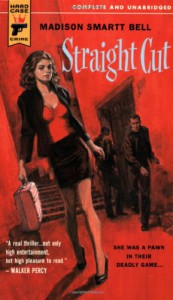 Tracy Bateman, a former film editor, goes to Italy to cut a film for a friend. Throw in his ex-ish-wife Lauren and a mysterious briefcase and the ensuing chaos, and you have Straight Cut.

First of all, there were things I liked about this book. The writing was good and I liked some of the ideas, like how Tracy figured out how to smuggle the briefcase back to the states. I felt sad when Tracy had to put down his dog at the beginning. Poor dog.

The things I didn't like? Not a lot happened that I cared about. None of the characters really gripped me. It felt like seventy pages could have been easily pulled out. Do I really need to know how difficult the film was to cut? Not in a Hard Case book I don't!

So, I guess you could say Straight Cut isn't a bad book. It's just not a particularly good one either. It's just there. I'd give it 2.5 stars if I could.
Tweet