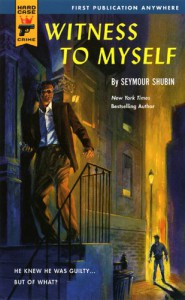 When Alan Bennig was 15, he had an odd encounter with a girl on a beach. They struggled, she fell, and he ran. Now, fifteen years later, Alan is consumed with a desire to find out if he killed the girl. Will what Alan finds destroy him?

Witness to Myself isn't your typical Hard Case. It reminds me of The Confession a bit. Seymour Shubin really knows how to build the tension and give us an insight into Alan's tortured psyche and makes the reader care about him despite his flaws. That's really about all I can say without giving too much away.

While it isn't a typical Hard Case, it's definitely worth a read for fans of psychological suspense.
Tweet