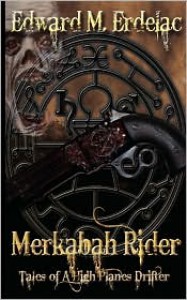 Merkabah Rider: Tales of A High Planes Drifter is a collection of four tales about a Jewish mystic gunfighter.

The Blood Libel: Fate draws The Rider to Delirium Tremens, a mining town where hostility is brewing between the residents and the Jews of nearby Little Jerusalem, who've allegedly turned away from God and kidnapped the daughter of the local preacher. Can The Rider find the cause of the trouble before the Angels of Death wipe out everyone in Little Jerusalem?

The Blood Libel does a great job of introducing The Rider and his world. The Rider's continuing quest is to find his mentor and betrayer, another mystic calling himself Adon. The world building is surprisingly deep for a 70 page novella. Erdelac introduces the Sons of the Essenes, a Jewish mystical society with branches in all parts of the world, as well as revealing parts of the Rider's history.

The story itself is a nice melding of western standards and Jewish mystacism. I'm looking forward to when The Rider goes up against The Great Old Ones.

The Dust Devils: An unending dust storm grips the town of Polvo Arrido as The Rider rolls into town. Can The Rider find clues to Adon's whereabouts and save the residents of Polvo Arrido from the bandits that have them under thumb?

While I didn't like this one as much as The Blood Libel, it was still pretty good. It reminded me of Indiana Jones and the Temple of Doom more than anything else. The Rider's past was fleshed out a little bit more and, once again, he took a pretty good beating and still came out on top. The one complaint I have is that he walked into an ambush a little too easily when he visited Scarchilli.

Hell's Hired Gun: The Merkabah Rider encounters an old preacher, who recounts the tale of Medgar Tooms, a gunfighter that killed an entire town after the death of his family and now stalks the prairie dragging chains and leading a pack of ravenous pigs. Can the Merkabah Rider put an end to his reign of terror?

Hell's Hired Gun was pretty good but didn't involve much in the way of magic from the Rider. The violence was well done and the subplot of the Hour of Incursion by the Elder Gods mentioned in the first story was elaborated upon.

The Nightjar Women: The Merkabah Rider finds himself in a town where no children are born and three prostitutes seem to be in league with a dark power...

At last, The Rider gets a hint of Adon's whereabouts. More of The Rider's past is revealed, and more about the Hour of Incursion. Lots of Talmudic stuff in this one and The Rider seems more human than ever. The Merkabah Rider continues his transformation into one of my favorite weird western characters. That's about all I'm going to reveal for fear of spoilage.

Conclusion:
For fans of weird western, look no farther than the adventures of the Merkabah Rider. I'll be tracking down the second volume very soon.

Note: You can read an interview with Edward M. Erdelac here.
Tweet