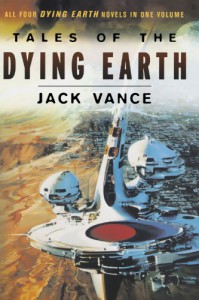 Earth is on its last leg. The sun is a red giant, the moon has vanished, and magic has returned.

This omnibus includes the following four books:
The Dying Earth: The Dying Earth is a collection of linked short stories. And here they are:
Turjan of Miir: Turjan, a wizard, seeks the help of Pandelume, another wizard, in creating artificial life. Turjuan is a good intro to the Dying Earth. The basics of the setting are covered and it sets the tone for the rest of the short stories. The story itself is pretty simple. Turjan has to do a favor for Pandelume in exchange for his secrets.

Mazirian the Magician: Mazirian covets Turjan's secret of artifical life, and also T'sain, the woman Turjan has created. MtM was like an extended chase scene showcasing some of the weirder denizens of the Dying Earth. I liked it but so far all the wizard characters have been nearly interchangeable.

T'sais: T'sais, the woman created by Pendelume, comes to earth to find beauty. What she finds is trouble, as well as a disfigured man named Etarr and the sorceress that cursed him. More of the Dying Earth is revealed and the ending is definitely worth the read.

Liane the Wayfarer: In order to win the hand of a witch named Lith, Liane seeks to recover half of a stolen tapestry. But is he a match for Chun the Unavoidable? Liane is almost like a prototype for Cugel, the protagonist of later Dying Earth stories, amoral and greedy. Chun's robe of eyeballs is a chilling image.

Ulan Dhor: Ulan Dhor, nephew of Prince Kandive, goes to the ancient city of Ampridatvir to retrieve the magic of Rogol Domendonfors in the form of two tablets. Instead, he finds a bizarre city where everyone wears green or grey and can't see people wearing the opposing color. Can Ulan find the two tablets and take them back to Kandive? This story was easily my favorite so far. Even though it was only twenty pages, a lot of ideas were crammed into it. It's becoming easier to see how Vance influenced so many that came after him.

Guyal of Sfere: Guyal's father gets tired of his inquisitive nature and sends him looking for the Museum of Man, where the Curator can answer all of his questions. Only Guyall finds trouble along the way... Guyal's tale takes him into the odd culture of the Saponids and against ghosts and demons. The message of this tale seemed to be "Don't forget the past but don't worship it either."

Eyes of the Overworld: Caught in the act of robbing the wizard Iucounu, Cugel the Clever is flung to the other side of the world, tasked with retrieving the missing Eye of the Overworld. Can he retrieve the Eye and get revenge on Iucounu?

Here's where the Dying Earth kicks it up a notch. Cugel is a scoundrel and a liar; a classic anti-hero. He lies and bluffs his way from situation to situation. He brings to mind Roger Zelazny's Jack of Shadows, as well as Hugh Cook's Drake Douay.

There is a lot of dry humor in this story as Cugel gets flung across the world, imprisoned, sent back in time, and imprisoned again, never forgetting about getting revenge on the one who "wronged" him. Vance's P. G. Wodehouse influence is visible in the dialogue and in the situations.

Cugel's Saga: Cugel's woes continued as he is flung across the world a second time by Iucounu. This time, Cugel gets himself indentured as a worker retrieving scales in a pit of muck and, later, as a worminger aboard a ship. Will he ever get back home and finally give Iucounu a taste of what's coming to him?

Cugel's Saga was even better than the Eyes of the Overworld. Once again, Cugel lied and cheated his way back to Almery to get his revenge on Iucounu. Vance's Wodehouse influenece was even more visible in this tale. Cugel is a like a sociopathic version of Uncle Galahad or Uncle Fred.

Even for a fantasy story, this one is pretty sexist. Still, it's hilarious, especially when the wizards fall victim to the squalm.

Fader's Waft: Another wizard launches a smear campaign against Rhialto and he has to traverse time and space to redeem himself.

Hilarious. I have to think Terry Pratchett's wizards are influence by Rhialto and company.

Morreion: Rhialto and company attempt to solve the mystery of Morreion, a wizard who disappeared aeons ago, along with the origin of the IOUN stones.

As in the previous story, the bickering and pettiness amoung the wizards is hilarious, much in the vein of P. G. Wodehouse. The ending was poignant and was a perfect example of Vance's penchant for anti-heroes.

Closing Thoughts: What a difference 15 years makes! I was 18 the first time I visited the Dying Earth and didn't care for it all that much. With age comes wisdom and I loved the Dying Earth on my second visit. While it's influential to fantasy and Dungeons and Dragons in particular, it isn't the breezy read a lot of people expect. It reads like a mix of Fritz Leiber and P.G. Wodehouse. Vance's anti-heroes are the inspiration for countless that came later. Cugel the Clever has risen to become one of my favorite fantasy characters. I came for the SF but stayed for the subtle humor and uniqueness. If you've lost your taste for heroes and crave fantasy, a visit to The Dying Earth will do you no ill!