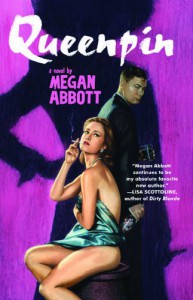 A young woman working as an accountant at a nightclub is taken under the wing of Gloria Denton, a cunning and ruthless mob woman. While Gloria teaches her the ropes, she falls in love with a gambler named Vic. Vic's heavily in debt and has a plan: rip off Gloria Denton!

Megan Abbott knows how to noir it up with the best of them. Queenpin is a twisting tale with a lot of double dealing. The nameless protagonist goes from being an accountant to a runner and beyond. Once the attempt to rip Gloria off goes down, the book kicks into high gear with paranoia and double crosses.

The writing is really good and reminds me of Christa Faust at times. Gloria Denton is a very well realized character. I sure wouldn't want to cross her.

Any complaints? It was too short and the ending was a little too easy. Other than that, it was one hell of a read.
Tweet