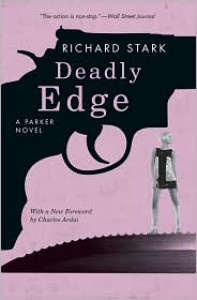 Parker and three other crooks steal the take from an arena rock concert. Soon afterwords, persons unknown begin killing the people involved in the caper. Can Parker stop them before he, or Claire, becomes another victim?

Deadly Edge was one of the best Parkers yet. While the heist was well written, as always, it was the cat and mouse game with Parker and his cronies that sold the story. Without spoiling too much, the penultimate confrontation in the dark near the end was intense! The villains were a little too close to reality, drug-addled psychopaths that they were. Claire rose in my esteem and was more than just a way to get at Parker, as she was in the Black Ice Score. As always Parker is Parker, the consummate professional.

Parker keeps rolling right along. If you liked the previous volumes, you'll be getting this no matter how I rate it. If you only get three or four Parker books, this would be one of the must-gets.
Tweet