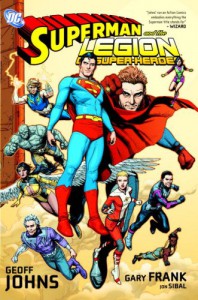 Way back in the day, the only place I ever got comics was right off the rack in the drug store. A chance purchase in the second grade made me switch my super hero loyalties from Batman & Robin to the Legion of Super Heroes. I don't remember the number of the issue, but it was somewhere in the 320's or 330's of Tales, the one where they find out the Dark Circle is really a crap ton of clones. How could a kid not like a super hero team composed of kids in the future? From there, I grabbed the Legion where ever I could find it, up until the last issue of Tales of the Legion.

Superman and the Legion of Super Heroes brings back fond memories of that time. Superman takes a Time Sphere to the 31st century where Earth has become xenophobic, the Legion are outlaws, and Superman's legend has been perverted by Earth-Man. To top it off, the sun has gone red. Superman teams with what's left of the Legion and goes about setting things right, all with the prospect of an intergalactic war looming in the background.

Geoff Johns shows why he's the most consistently good writer in comics today in this one. There are nods to the past without wallowing in it, the characters are consistent with their past incarnations (ie the Levitz/Giffen era Legion), and the story goes pretty smoothly. When the sun went back to yellow and Superman regained his powers and took the fight to Earth-Man, I felt like a kid again. I must have been grinning like a jackass. Gary Frank's art suited the story perfectly, detailed but not overwhelmingly so.

For fans of the silver age of DC comics, this is one not to miss.
Tweet