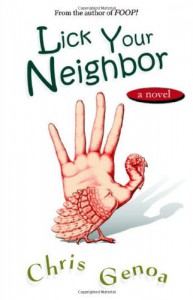 Dale Alden wakes up on the day before Thanksgiving and finds the town mascot, Gobbling Gus, hanging in his back yard. From there, the day gets worse. Dale gets fired from his job, finds a decapitated corpse in his backyard, and gets entangled with turkey-faced ninjas and something worse; his brother in law Randy. Can Dale clear his name and save Thanksgiving and the world?

You know those weird thoughts you have in the gray area between dreams and reality? Apparently Chris Genoa writes that shit down and turns it into books. I've been aware of Chris Genoa since Christopher Moore mentioned Foop on his website years ago. Genoa's writing is a lot like Moore's and should appeal to the legions of Moore fans. For instance, check out this bit of dialogue, one of many gems embedded in Lick your Neighbor:

"I thought witches were women and warlocks were men."
"What's the difference?"
"One has a penis and the other a vagina."

The story is hilarious and the tone reminded me of A Dirty Job by the aforementioned Moore. Dale Alden and his lawyer/brother in law Randy make quite a pair. Throw in magical conspiracies involving the first Thanksgiving, hilarious excepts from Dale's ancestor's journal, and ninjas with turkey faces and you've got one hilarious book on your hands. I don't want to give more away but how many stories have you read that involve a catapult in the back of a station wagon and a man carrying an older woman away on a pogo stick?

I received this book as part of the Firstreads giveaway program but definitely wouldn't have minded shelling out some of my moderate to light-earned coin for it. Definitely worth a read for fans of Christopher Moore and similar books.
Tweet