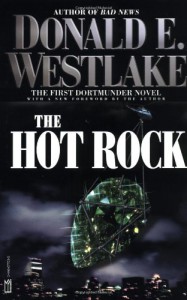 Fresh out of the clink, John Dortmunder gets draw into stealing an emerald belonging to an African nation. Only circumstances work against Dortmunder and his crew and turn the one heist into five. Will Dortmunder and crew ever get their hands on the emerald?

Wow. I'd heard the Dortmunder books were good but I had no idea. Dortmunder and crew are a well-developed group, especially Murch, the getaway man who listens to the record of the Indy 500 in his spare time. Westlake creates a series of hilarious but believable situations to stick poor Dortmunder in.

While Westlake wrote the Parker books under his Richard Stark pseudonym, the writing couldn't be more different. His style in The Hot Rock reminds me of Christopher Moore and similar authors.

I'd recommend this to crime fiction fans with a sense of humor and also Christopher Moore fans.
Tweet