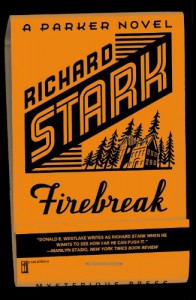 Parker hooks up with some other criminals to steal art from an internet millionaire's hunting lodge. But can Parker and the gang complete the heist with someone sending hitmen to kill Parker?

I loved the beginning of Firebreak. Parker's in the process of killing a man sent to kill him and makes Claire answer the phone. As for the rest of it...?

Like most of the Parker books released after Butcher's Moon, Firebreak seemed really padded. While I liked the idea of some people Parker shouldn't have left alive gunning for him, the whole art heist part of the plot seemed excessively complex and not like something Parker would have gotten involved with or stayed involved with as complication after complication arose. It took forever to get to the actual heist.

That being said, Parker still does what he does best in Firebreak. If you liked the rest of the Parker books, you'll like this one. Just don't expect the magic of the pre-Butcher's Moon era.
Tweet