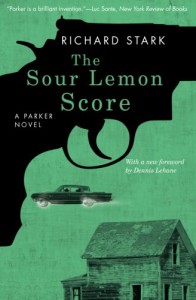 When the loot from a heist falls short of expectations, George Uhl kills two of the men and takes the money. Too bad he didn't finish the job and kill Parker too. Now Parker's on his tail and wants his money and George Uhl's hide. Too bad other people are after George and the money as well...

The Sour Lemon Score really washed away the lingering bad taste of The Black Ice Score. Parker does what he does best, solving problems. With no Claire to soften him, he's the relentless Parker of old. The plot itself is like a throwback to the earlier Parkers where you just waited for the inevitable double cross.

The heist of the title was only a minor part of the plot. Parker traipsing around the country trying to catch Uhl was the driving force of the story and kept the suspense going. Parker showed a little more compassion than we're used to near the end but it felt consistent with his character, as did the state he left his enemies in.

Another first rate Parker story by Richard Stark. If you liked the others, you'll like this one.
Tweet