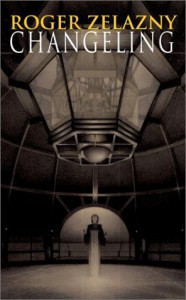 Upon the death of Det Morson, the wizard Mor takes Det's son Pol to a world dominated by technology and switches him with baby Daniel Chain. Pol is raised as Daniel Chain and Chain becomes Mark Marakson, a youth with an extraordinary aptitude for technology. When villages kill Mark's father and attempt to kill him, Mark vows revenge and begins building an army of war machines. Who can stop him? None other than Pol Detson, the boy raised in his place...

While a fantasy story, Changeling is more about law versus chaos, magic versus technology, and preservation versus innovation than it is good versus evil. Mark Marakson, the villain of the piece, is more of a misunderstood loner than anything else and not entirely dissimilar to Pol Detson, his magic-wielding counterpart. Had the story gone slightly differently, their roles could have easily been reversed.

I liked the world, as I normally do when I get old technology in my fantasy stories. The magic system was interesting and reminded me of the one used in The Changing Land. I also liked that Zelazny's dragons were a lot like Michael Moorcock's.

So why only three stars? Because I couldn't give it 3.5. Honestly, it's a good story but it has it's flaws. It feels a little light and a little short. None of the characters besides Pol and Mark are very developed and the ending is visible from 150 pages away. While there's an underlying philosophical message, I just didn't care about the characters as much as I did the ones in Amber, Lord of Light, This Immortal, and other Roger Zelazny works. It's worth a read but it's not as impressive as some of Zelazny's other books.
Tweet